The future of offshore fish farming faces many obstacles

According to the Food and Agriculture Organization of the United Nations, about 110 billion more pounds of seafood will be needed by 2030 to meet population growth and increased seafood demand. Wild fish stocks worldwide have suffered due to overfishing and climate change.

“Improved fisheries management has allowed many wild fish stocks to bounce back,” said Kai Lorenzen, a University of Florida fisheries professor and Florida Sea Grant fisheries specialist. “But even with the best fishery management, there still wouldn’t be enough seafood to meet the growing worldwide demand.”

The U.S. is now finalizing NOAA’s Gulf Aquaculture Plan, a proposal that would allow between 5 and 20 fish farms to set up shop in the federal waters of the Gulf of Mexico, producing up to 64 million pounds of native Gulf species, except shrimp and corals. The U.S. currently imports about 90 percent of its seafood. NOAA’s aquaculture plan is meant to help curb the nation’s $10.4 billion seafood trade deficit.

In the lab run by Daniel Benetti, director of aquaculture at the University of Miami, a team of researchers is evaluating the environmental impacts of open-ocean aquaculture on the marine ecosystem with $225,755 in research funding from Sea Grant. 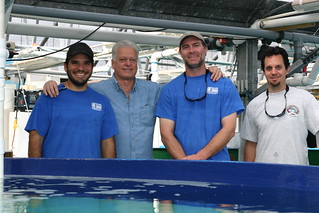 Daniel Benetti (second from left) and his team are working to solve some of the knowledge gaps of marine aquaculture. FSG photo

The researchers are working closely with Open Blue Sea Farms, a U.S. corporation that commercially farms cobia. Although Open Blue is using U.S. technology, the submersed cages are located off Panama due to hurdles in the U.S. permitting process.

Benetti and his team are attempting to quantify the environmental impacts of excess nutrient levels generated from the waste of caged fish. Increased nutrient levels can cause dead zones, harmful algal blooms and fish kills. But Benetti said it is possible that in open-ocean aquaculture facilities, nutrients dilute enough to not have any detectable impact.

While results from Benetti’s study are still to come, there are many other concerns about offshore fish farming besides nutrient discharge. 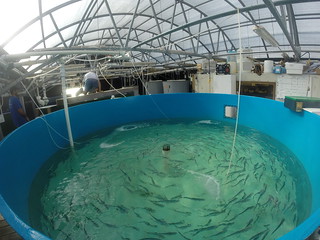 Mahi-mahi is one of the species under consideration for commercial aquaculture. FSG photo

Food and Water Watch says that growing large amounts of fish in close quarters could contribute to the spread of disease and contamination. The group is also concerned that wild baitfish stocks harvested to feed caged fish could be depleted.

Other groups, like the Southern Shrimp Alliance, said the Gulf Aquaculture Plan might limit commercial fishing access. NOAA addressed these concerns by prohibiting fish farms from setting up on traditional trawling grounds.

Another common concern about open-ocean aquaculture, especially in the Gulf of Mexico, is the impact of hurricanes on the cages. Opposition groups worry that when a hurricane hits, cages could become damaged and cause the farmed fish to mix with wild species.

Benetti acknowledged that the Gulf is a complicated environment and there are still major knowledge gaps that need to be addressed. He said the environmental impact is just a piece of the puzzle before snapper, tuna and other species can be grown for food.

The higher cost of U.S. labor, and the 64 million pound cap on fish production could hinder the economic potential of the Gulf Aquaculture Plan.

“Whether we would be doing open-ocean aquaculture in the near future in the Gulf, it’s very challenging,” Benetti said. “Perhaps we should also look into alternatives such as stock enhancement.”

But Lorenzen said the 64 million pound cap is an initial estimate and could be changed in the future.

“The Gulf Council wanted to set a safe limit to begin with, but that number could be revised as new scientific information becomes available. Monitoring of the first farms to be established will allow us to get better estimates of the aquaculture production that the open Gulf can sustain,” Lorenzen said.

The Gulf Aquaculture Plan was originally drafted by the Gulf of Mexico Fisheries Management Council when it started receiving requests for offshore aquaculture permits in the early 2000s. The plan was finalized by the Council in 2009.

NOAA is the agency responsible for implementing the regulations in the plan, which is currently under review by many federal agencies, including the U.S. Food and Drug Administration and the U.S. Environmental Protection Agency, the U.S. Army Corps of Engineers and the U.S. Office of Management and Budget. Recommendations are set to be published in the Federal Register for public comment in the coming months. Public comments will be addressed by the federal agencies and interested fish farmers may be allowed to start applying for permits by the end of this year.

Ron Hoenig, the fish hatchery manager at the University of Miami, said in order to get this research from paper to the industry, Americans need to become more aware of the need for aquaculture for sustainable seafood production.

“Well, our wild captive fisheries are static. All of that fish needs to come from aquaculture,” Hoenig said. “We’re really looking to find ways to work with the industry and improve the process so that we can realize the true potential for aquaculture and meet that demand in the future.”