New Methods For Quantifying Spatial Extent of Cyanobacterial Blooms in the U.S. Across Different Geographic Scales

Cyanobacteria, also known as blue-green algae, are a group of microorganisms that live in aquatic environments throughout the world. Some types of cyanobacteria are known to produce a variety of toxins that may cause harm and sometimes death to fish, wildlife, domestic animal, and rarely, humans.

Several studies have indicated that cyanobacterial harmful algal blooms (cyanoHABs) have increased in frequency, extent, and magnitude, globally over the last several decades. However, data are not available to quantify these metrics at regular intervals and across wide geographic scales. The lack of this information poses future risk to the environment and public health.

To inform monitoring priorities and management decisions, timely assessment methods are needed for regions experiencing cyanoHABs, as well as those where blooms are likely to occur in the future. To that end, a recently published paper (2022) by Schaeffer et al., quantified the spatial extent of cyanoHABs using satellites from the European Space Agency (ESA).

This study provides the first assessment of cyanoHAB spatial extent across the continental United States at geographic scales relevant to states and local agencies for making management decisions. There’s a huge amount of information to be gleaned here and I will only gloss over some it. To learn more, you can access the full research paper here.

The focus of this study was lakes and reservoirs greater than one hectare in size, that met additional study criteria (hereby referred to as resolvable lakes). The Great Lakes were excluded from this study because other programs already focus on them.

The satellites sensors used in this study were the MEdium Resolution Imaging Spectrometer (MERIS) onboard Envisat (2008-2012) and the Ocean and Land Colour Instrument (OLCI) onboard Sentinel-3 (2017-2020).

Though findings below are presented for both time periods, graphics only cover the later period from 2017-2020 for space’s sake. Equivalent 2008-2011 graphics can be accessed via the supplemental information link provided in the full paper.

2,192 lakes were resolvable via the imagery from the two satellites and included in the analyses. The resolvable water area varied over time due to missing data masked by clouds, snow, and ice as well as excluded data along the land/water interface. All the contiguous continental states, with the exceptions of Delaware and West Virginia contained resolvable lakes and were included in the study. Minnesota contained the most at 393 lakes and Connecticut the least with 3 lakes (Figure 1). 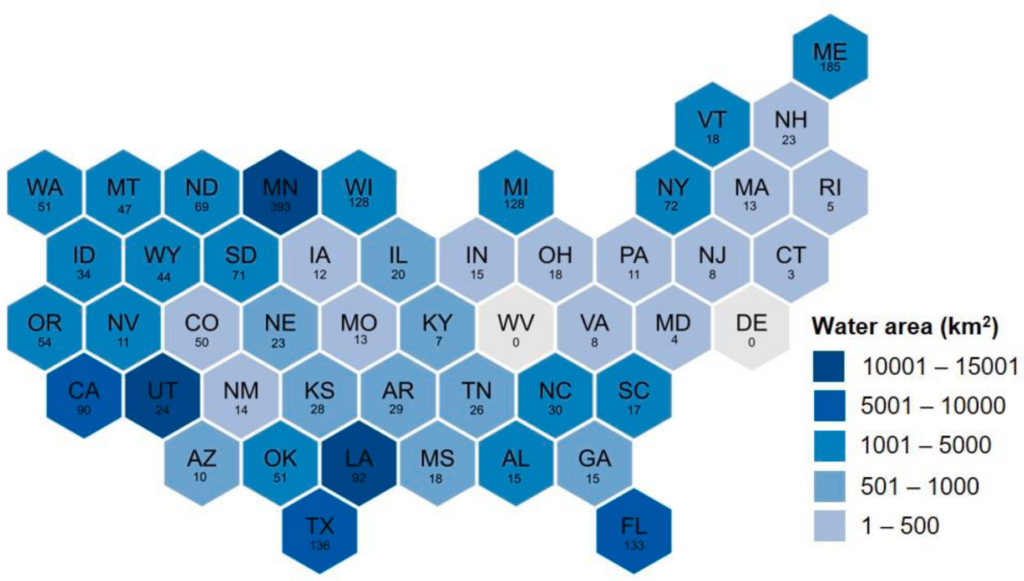 Figure 1. Median satellite resolvable water area (km2) for 2017-2020 at a 300-m2 spatial resolution. Below each lake is number of resolvable lakes included in the study. Graphic from Schaeffer et al. 2022.

Nine regions were defined based on climatology (Figure 2). Between 2017 and 2020, all regions increased cyanoHAB spatial extent although the strength of change varied with greatest increases in the South and Southeast regions (8.6% and 10.9% respectively). Between 2008 and 2011, negligible change was experienced in all regions, apart from the Southwest where spatial extent declined by -4.5%. 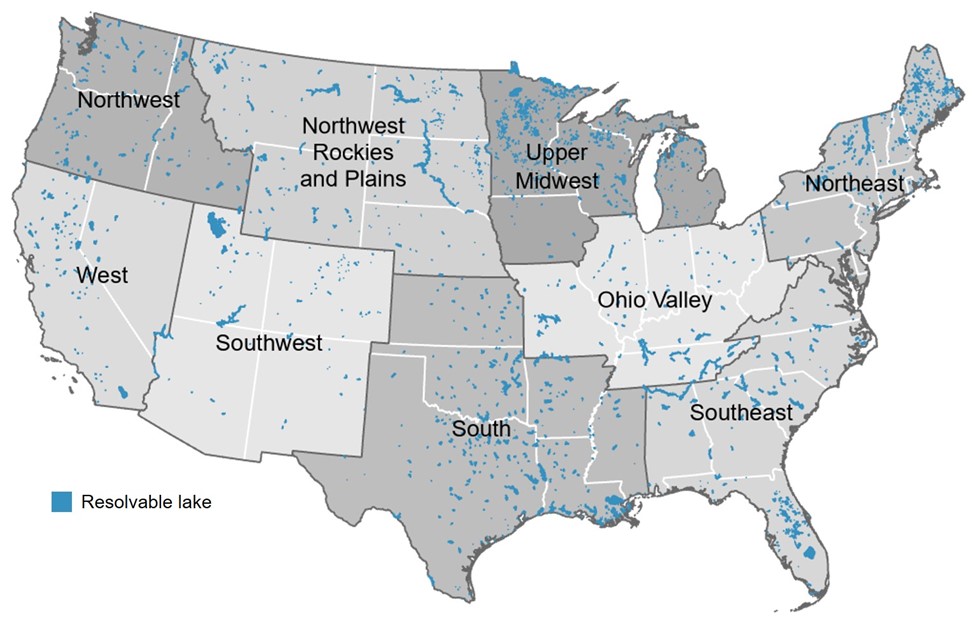 At the state-scale, median cyanoHAB spatial extent percentages were binned into the following four categories: 0-25%, >25-50%, >50-75%, and >75-100%. During 2017-2020, as seen in Figure 3, no state had median cyanoHAB extents greater than 75% (6 states were greater than 75% between 2008 and 2011). Eight states had median extents equal to or greater than 50%, and 26 states had median extents below 25% (5 states below 25% between 2008 and 2011). During the 2017-2020 period, strong increases in monthly spatial extent were observed in New Jersey and Louisiana. Maine exhibited a decrease in cyanoHAB during 2008-2011; however, greater than 75% of its resolvable water area had cyanoHABs detected during the same period. This highlights an important study finding – that a decrease or lack of change in cyanoHAB spatial extent does not necessarily correspond to a lack of cyanoHAB concern. 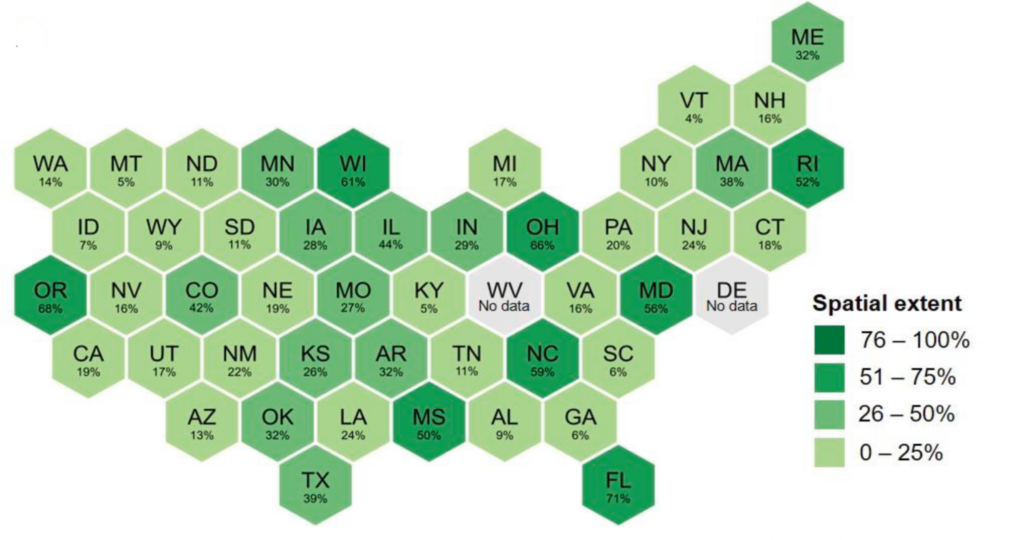 The paper’s findings, some of which were presented here, are an important step in understanding if and where cyanoHABs are increasing, decreasing, or remaining constant across different geographic scales. The methods, employed by the authors, provides each state with a uniform approach for assessing cyanoHAB spatial extent over time via operational satellites. Applying a standard assessment method across space and time may aid in the prioritization of resources, and information on location and extent may inform routine monitoring and management of recreational and drinking water quality and ecosystem health at meaningful geographic scales.

As a final note, future efforts, could apply the approach used in this study to different satellites/sensors with higher spatial resolution and new algorithms, thus expanding the number of lakes examined.

And don’t forget, so much more can be learned by reading the full paper here.