Red tides occur around the world and are formed by several harmful algal species; they result when these organisms grow rapidly or “bloom”. In Florida, red tide is caused by a toxic alga called Karenia brevis (K. brevis), which blooms off the southwest Florida coast almost annually. Blooms may last from a few days to a year or more, depending upon a variety of factors, and often result in some type of societal and environmental impact.

We experience harmful effects during red tide blooms because of toxins produced by the K. brevis organism. These toxins accumulate in shellfish, such as clams and oysters, and may cause a condition known as neurotoxic shellfish poisoning (NSP) if contaminated seafood is consumed. Wave action near the coast can cause K. brevis cells to break open and release their toxins. Some of these toxins may adhere to water droplets or salt spray where they are carried into the air and transported by winds. Aerosolized toxins can cause respiratory irritation, and for people with severe or chronic respiratory conditions, such as emphysema or asthma, they can result in serious illness. Red tide toxins also cause fish and wildlife mortalities, and disrupt ecosystem function, causing negative impacts to water-dependent industries and ecotourism that rely on healthy coastal ecosystems.

Because red tide blooms can be so detrimental, there is considerable interest from the public and scientists alike in developing tools to control blooms or at least decrease their impact. Over the last several years, a great deal of focus has been devoted to this topic, which we will describe below. For more information about Florida red tides, including what causes them and their impacts, please refer to the resource section at the end of this blog.

Several entities are involved in red tide control and mitigation. In 1999, the Florida Fish and Wildlife Conservation Commission (FWC) established the Harmful Algal Bloom Task Force, which helps guide research, monitoring, control and mitigation efforts for many harmful algal bloom species. The task force was reactivated by Governor DeSantis in 2019 with explicit direction to focus on red tide in collaboration with Mote Marine Laboratory’s Florida Red Tide Mitigation and Technology Development Initiative. In addition to providing a state-of-the-art facility for red tide research, the Initiative funds projects from private and public research entities looking to develop technologies and approaches that will decrease the impacts of red tide on the quality of life in Florida.

Harmful algal blooms also concern the federal government. In 1998, congress authorized the Harmful Algal Bloom and Hypoxia Research and Control Act, which created an Interagency Working Group tasked with developing action plans and assessments for harmful algal blooms and low oxygen events. The Working Group includes 13 federal agencies, chaired by the National Oceanic and Atmospheric Administration (NOAA) and the Environmental Protection Agency (EPA), bringing total involvement to 15 agencies. NOAA often oversees many aspects of Harmful Algal Bloom response. They are also partnering with the University of Maryland’s Institute of Marine and Environmental Technology as well as Mote Marine Laboratory to fund the Harmful Algal Bloom Control Technology Incubator, which will support laboratory experiments that test innovative bloom control tools. Florida Sea Grant specifically has programming and faculty dedicated to not only furthering the state of red tide science in Florida, but also facilitating information exchange between the public, scientists, and natural resource managers.

State of the Research

Depending on source and context, readers may find slight variations in definitions for bloom control and mitigation when researching the topic. This area of research is complex with much intricacy and even some overlap. The definitions we use here align closely with those used by the U.S. National Office for Harmful Algae and are further described below. 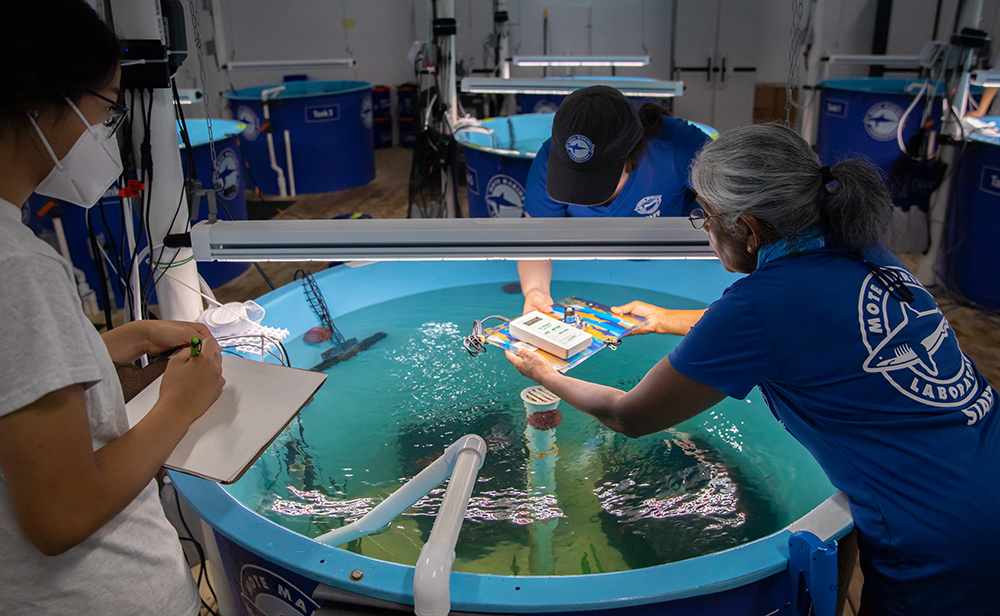 Bloom control refers to actions taken to suppress or destroy blooms. Control mechanisms focus on the organisms themselves and/or their toxins, killing or removing them. It is a challenging and often controversial management approach with varying use around the world.

In the case of Florida red tide, toxins are released into the water as the K. brevis organism dies. Control methods must deal with both the organism and the toxins in the water – not an easy task – but if both are not addressed, the cure prescribed may make matters worse. To date, this has not been possible.

The control strategies currently being evaluated are highly scrutinized. Methods must show that they are reasonably specific for K. brevis and have no or minimal damage to other organisms and the environment. To demonstrate this, proposed methods undergo a scaled-up testing approach from beakers to small tanks to larger tanks before advancing to demonstration projects in the field. Bloom control strategies being evaluated generally fall under three types: biological, chemical, and physical, and combinations of these types.

Chemical bloom mitigation and control includes cleansing agents and algicides that kill harmful algae cells. As mentioned earlier, K. brevis cells release toxins when they die. Leftover cell bodies may also fertilize a bloom further as they decompose. Algicides control a bloom by killing K. brevis but mitigating the impact of blooms also requires addressing the byproducts of algicide application. For example, scientists are investigating activated carbon (charcoal) as a substance that could not only administer algicide, but then absorb released toxins. Ammonium compounds also show promise as an algicide that prevent the algae from releasing toxins upon death.
Added considerations are necessary when applying chemical treatments in water. Even meticulously applied compounds can be diluted by seawater or carried away from the bloom they were intended to treat by wind and currents. Scientists are investigating administering compounds in slow-release pellets and the use of floating water treatment platforms to address these concerns. Efforts investigating optimal dosage, toxicity to non-target organisms, chemical interaction with seawater and persistence in the environment continue for new control strategies as they arise.

Biological bloom control can include a wide array of techniques, all based around using features of the natural environment. It could include installing living shorelines or using K. brevis specific parasites, but most efforts currently focus on amplifying the effects of natural algicides produced by bacteria, macroalgae and seagrasses. One compound has also been targeted that can be extracted from brewer’s spent grain, a byproduct of beer brewing. Scientists can both apply these algicidal organisms to blooms in their unprocessed form (i.e., allowing bacteria to interact with K. brevis directly) or work to distill the compounds that kill harmful algae. As with chemical control, there are trade-offs to both approaches in effectiveness and application. Similar concerns also exist about how biological control may affect non-target organisms.

Physical bloom control includes the use of barriers or removal strategies to eliminate cells from the environment. For example, robots that can sense K. brevis cells, filter them from the water then convert them into biofuel have shown success in laboratory settings. Scientists are also investigating using solar powered ultraviolet lights to kill K. brevis, like those used to kill algae in aquariums. They propose that these lights could be programmed to turn on when K. brevis cells reach predetermined concentrations, effectively cutting blooms off before they become extreme. Often, however, physical removal is a great candidate to combine with other control types. Nanobubbles—tiny gas bubbles— may be used to create a physical curtain that prevents algae cells from spreading, but also have chemical properties that can kill cells, and breakdown released toxins. One particularly promising physical control method is the use of clay particles, which when added to seawater, create a chemical reaction that causes K. brevis cells to clump together and sink to the bottom. Removing cells from the water column without killing them removes the need to address the immediate impacts of released toxins.

Field projects to develop methods of controlling red tide must follow guidelines developed through the National Environmental Policy Act (NEPA). Added compliance with the Federal Insecticide, Fungicide, and Rodenticide Act (FIFRA), which governs the registration, distribution, sale and use of pesticides in the United States may also apply.

As such, occurring in parallel with the cultivation of each tool or device is the development of a regulatory oversight process.

Designed to ensure environmental compliance for the technology and its intended application, this process lays out the types of field research and demonstration projects that can be conducted. It also describes limitations, monitoring, and requirements associated with said field demonstration.

Currently 6-7 technologies are moving through the regulatory process.

Mitigation is an approach designed to lessen impacts of blooms. Mitigation will not end a bloom but rather make living with it better. Mitigation strategies are more feasible and, hence, currently more operational than control strategies.

Early detection of a bloom and short-term predictions of bloom movement are forms of mitigation, as they can focus monitoring and toxin testing where needed.

Though crude at best, avoidance is a critical mitigation strategy for protecting the public while minimizing economic impact to businesses and tourism. Public facing communication tools such as the Beaches and Shores Conditions Report and HABscope respiratory forecast, are designed to improve the public’s ability to avoid respiratory exposure and associated health risks by informing them of when, where and degree of exposure risk during active bloom events. These types of tools are needed because respiratory effects are strongly influenced by wind speed and direction – which changes throughout the day.

Neither mitigation nor control are a ‘one size fits all’ approach to dealing with Florida red tide. Several strategies will be needed based on the situation – size of bloom, location of interest, etc. Methods used must be safe for the environment, economically workable, and conducted at a proper scale. As such, current research efforts are focused on a suite of methods for a tool in the toolbox approach.

FWC’s Algae FAQ answers common questions from the public about red tide and provides information on formation and impacts.

The Florida Department of Health’s Harmful Algae Bloom page contains information on human health impacts that may result from red tide and blue green algae. In addition to supplying guidance on what to do around a bloom, there is also information on keeping pets safe.