Florida’s Coral Reef is a beautiful, national treasure that supports an incredible amount of life and provides jobs, coastal protection, and enjoyment for millions of residents and visitors. Since 2014, Florida’s Coral Reef has been experiencing a widespread and lethal coral disease outbreak called stony coral tissue loss disease (SCTLD). Although disease is a natural part of any ecosystem, SCTLD is worse than any other recorded coral disease due to the combination of its geographic range, longevity, number of species affected, and high mortality rates. 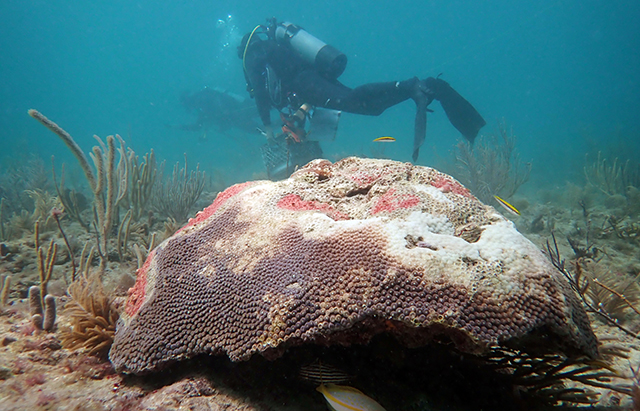 Q: What is the state of the disease in Florida?

A: The most recent scientific surveys in 2022 found that the disease is present at low levels throughout much of Florida’s Coral Reef (a disease state referred to as ‘endemic’). However, sites with large numbers of remaining corals, such as inshore reefs in the Florida Keys and most of the Dry Tortugas, are experiencing outbreak-level conditions in susceptible coral species (a state referred to as ‘epidemic’). The Dry Tortugas region is the area most recently affected by SCTLD in Florida and also currently contains the highest coral cover remaining on Florida’s Coral Reef. Due to the lingering impacts of the disease in endemic areas alongside rapid mortality in epidemic areas, the situation in Florida remains urgent.

Q: How has Florida responded to SCTLD?

A: A highly collaborative and effective team—with partners from federal, state, and local government agencies, non-governmental organizations, universities, aquariums, and members of the diving community—has been researching the disease, developing and applying treatments, rescuing vulnerable and surviving corals, strategically restoring coral populations, and more. Together, these partners have been working to preserve Florida’s Coral Reef and eventually support the recovery of this incredibly important ecosystem, shepherding the reef into a new era of innovation, hope and growing resilience.

Given that the disease didn’t reach the Dry Tortugas National Park until late spring 2021, partners were able to prepare for the arrival of SCTLD and mount a rapid response. Before SCTLD’s arrival, vulnerable stony corals were rescued from the region and placed under expert care at zoos, aquariums, and universities, alongside corals rescued from other parts of Florida’s Coral Reef. These corals were rescued both for safekeeping, and to serve as parent colonies for future coral restoration efforts. In addition, partners from the National Park Service, Nova Southeastern University, University of the Virgin Islands, and FAU Harbor Branch Oceanographic Institute, with funding from the Florida Department of Environmental Protection, collaborated to treat over 12,000 corals impacted by SCTLD.

To date, nearly $30 million has been allocated by the Florida State Legislature, NOAA, EPA, and other sources to support disease response in Florida.

Activities for response and recovery include:

— Investigating the cause(s) and spread of SCTLD, including relevant environmental factors.
— Developing new treatments for SCTLD, including antibiotics and beneficial bacteria called ‘probiotics’.
— Using targeted interventions to save corals at high-priority sites throughout Florida’s Coral Reef, from southeast Florida to the Dry Tortugas. As of September 2022, over 22,400 coral colonies have been treated in Florida.

— Collecting ~2,500 vulnerable coral colonies of 20 species affected by SCTLD to preserve their genetic diversity in long-term land-based nurseries, and to propagate them for large-scale restoration projects.
— Holding many species in human care for the first time. This has led to discoveries about the life cycles, reproduction, growth, and disease treatment response of these corals, especially for those species held in aquaria for the first time.
— Helping rescued corals reproduce. Offspring from rescued corals have been outplanted back to Florida’s Coral Reef, and over 4,000 baby corals are being produced in land-based facilities every year that will be used for restoration and restoration research projects.

Support For A Healthy Coral Environment

— Recognizing partners must work to improve the overall coral reef environmental condition to ensure the success of response and recovery activities. The disease does not exist in a vacuum.
— Improving water quality across the entirety of Florida’s Coral Reef. There are many ongoing projects to improve water quality. For example, the Florida Keys transitioned from septic to sewer to reduce nutrient pollution, and agencies and municipalities across Biscayne Bay are collaborating on projects to improve water quality across multiple standards.
— Understanding patterns and drivers of resilience to different environmental factors to support the restoration of a sustainable, vibrant coral reef ecosystem. 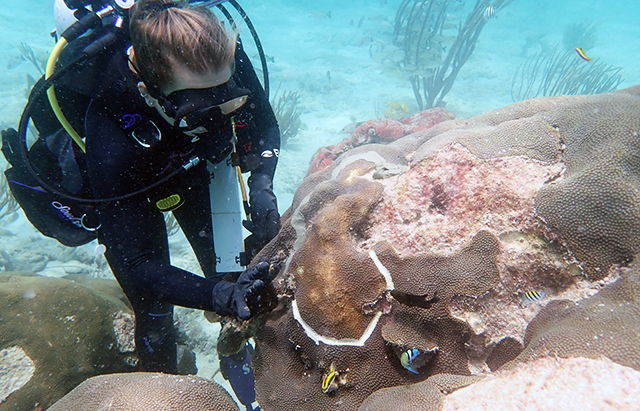 Q: Is there hope for the future of Florida’s Coral Reef?

A: Since 2014, scores of project partners and researchers have worked diligently and collaboratively to respond to the SCTLD outbreak on Florida’s Coral Reef. Despite the significant impacts of the disease, thanks in large part to the more than eight years of hard work by partners of the response effort, many of these susceptible coral species continue to survive and reproduce in South Florida.

While SCTLD may be the most lethal coral disease ever recorded, there is plenty that provides hope for the future of these essential coral reef animals. Hundreds of experts are working together within the response effort, and cutting-edge research continues to enable response efforts to better understand and protect Florida’s Coral Reef. Recognizing that SCTLD exists in an ocean that faces many other challenges, project partners are working to improve the overall coral reef environmental conditions to ensure the success of response and recovery activities. Redoubling a commitment to supporting healthy coral reefs and recognizing the essential role they play for healthy ecosystems, healthy economies, and healthy humans gives response efforts optimism for the future.