Joining the ‘Shark Side’ with Florida Sea Grant’s Armando Ubeda

Shark scientist and Florida Sea Grant extension agent Armando Ubeda loves talking about sharks, regardless of the audience. Over his career, he’s been involved with studies related to the movement and distribution of coastal sharks, shark fishing-related issues, and shark identification. As a UF/IFAS Florida Sea Grant extension agent with Sarasota County, he educates on shark ecology, evolution, conservation, safety and human-shark interactions among the many topics that affect healthy coastal ecosystems. At the University of Florida, Ubeda is currently conducting his Ph.D. investigating the behavioral ecology of elasmobranchs.

On Shark Awareness Day, we delved deeper with Armando for answers to all our shark questions and to learn more about his research and work in elasmobranchs.

Ubeda: There are a lot of cool things to talk about when it comes to sharks. One important topic is the importance of coastal habitats such as seagrass beds and mangrove fringes for shark survival, and the need for better management of these habitats.

Q: Tell us more about your interest in and work with sharks:

Ubeda: I am interested in ethology, which is the study of animal behavior. I am particularly interested in understanding how animals compete and cooperate during feeding and mating, and how animals migrate to and survive in what are often strikingly different environments. 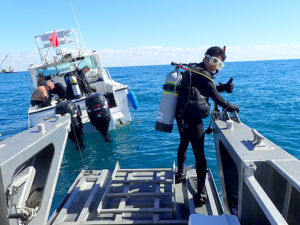 Q: What is your current research exploring?

Ubeda: At UF, my doctoral research focuses on the movement of elasmobranchs, specifically spatial segregation patterns of sharks and rays by size and sex. I believe that developing a better understanding of elasmobranchs’ population dynamics is key to understanding their ecological relationships, management, and conservation.

Q: You teach about the impacts of shark fishing as part of your education programming. Can you tell us more about your work in this area?

Ubeda: I have worked on projects assessing shark fishing efforts in Mexico, organized and led a shark identification workshop for fishery inspectors in Nicaragua, and worked on several projects looking at the abundance and distribution of shark species, including species targeted in commercial and recreational fisheries in the USA and Mexico.

Globally, there are many issues related to shark fishing. Sharks and rays are vulnerable to overfishing due to their late maturity, relatively long gestation periods, and low fecundity. Many species of elasmobranchs are already considered threatened or endangered–in danger of becoming extinct because of shark fishing.

Among the main impacts of shark fishing on coastal ecosystems is the decline of ecosystem health and diversity loss due to the removal of important predatory species, in this case, sharks and rays. Elasmobranchs are important predators, controlling populations of prey species, influencing ecosystem dynamics, and contributing to species diversity by removing sick and weak creatures from the ocean.

Q: As an extension agent, what issues and topics do you address in your education about sharks?

Ubeda: I have given many in-person presentations about sharks to diverse audiences from school children to fishing clubs to law enforcement agents and charter boat captains, among others.

I receive a lot of requests from schools, particularly from science clubs, to talk about sharks’ adaptations, ecology, and evolution, topics that match the school curriculum and interest of the children; One example was my participation in the Scientist in Every Florida School, led by the Florida Museum of Natural History, where I taught Florida middle schoolers about shark adaptations and evolution.

Another example of a shark extension program is my presentation about shark regulation updates and shark identification given to law enforcement agents, charter boat captains, and fishing guides at the annual West Coast Inland Navigation District meeting. On this occasion, I was invited to talk about the Shore-based Shark Fishing Course by the Florida Fish and Wildlife Conservation Commission and to go over identification of shark species that are most frequently misidentified. 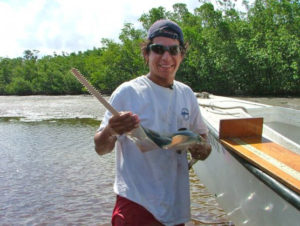 I love talking about sharks, and regardless of the audience, I always teach about the importance of sustainable fishing, the ecological and economic importance of elasmobranchs, and I share cool facts about these fascinating creatures. My goal is to bring more people to the “shark side.”

Better management translates into more effective policies and regulations that protect coastal habitats and restore degraded habitats, more public participation in maintaining natural shorelines in privately owned waterfront properties, and more support for elasmobranch research regarding the ecological relationship of coastal habitats and those species of elasmobranchs that inhabit and/or utilize those habitats. 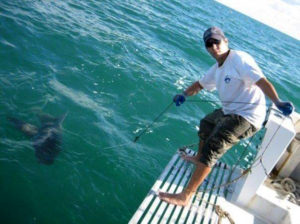 Q: Do you think Shark Week is a good way to learn about sharks?

Shark Week is a smart way to bring attention to these critical organisms, and to share cool new scientific findings with the public. Unfortunately, to catch people’s attention, I feel that some media platforms that participate in and/or contribute to Shark Week, utilize fear and anxiety to reel people in. In other words, Shark Week sometimes sensationalizes sharks, focusing on aspects that contribute to the anxiety and fear of sharks.

Q: What’s one thing you want the public to know about sharks?

Ubeda: Sharks have been on this planet for millions of years, making their homes in many different ecosystems around the world, from shallow coastal lagoons to the deep ocean. Regardless of how we, humans, feel about them, they are critically important components of the ocean; and the wellbeing of the ocean, our planet, and its inhabitants (including us) is linked to sharks.

Q: Bust one myth about sharks:

Ubeda: There are about 500 species of sharks, but only a few of them have the potential to be dangerous to humans, and the relative risk of a shark bite is very small. We need sharks in our ocean; all the different species play an important ecological role, and we need to protect them. Sharks are not angry-hungry-man-eater machines, they are integral components of marine ecosystems. Their diversity and adaptations are mind-blowing.

Interested in connecting more with Armando Ubeda over sharks? Reach him at aubeda@ufl.edu to join the “shark side.”

The money will go to fund my college tuition and research opportunities at the University of Miami. 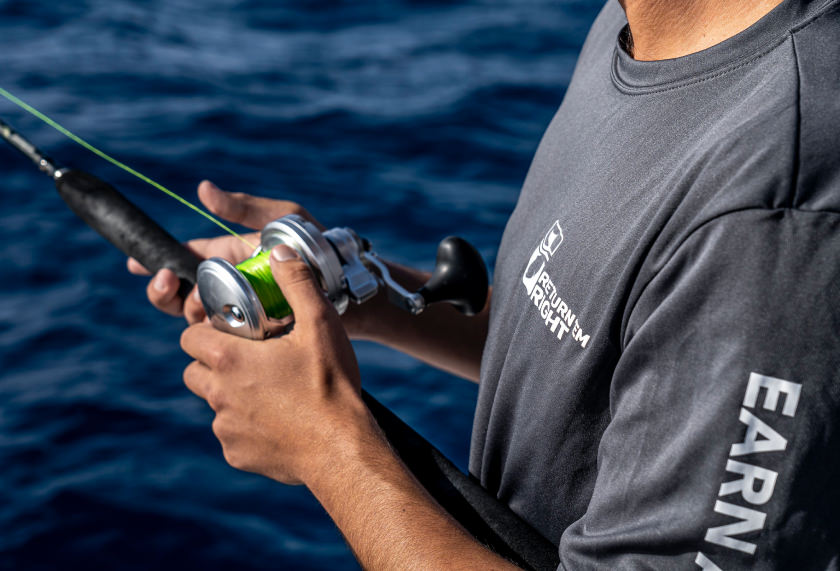 Return ‘Em Right promotes best release practices, with an emphasis on proper use of descending devices, which research shows can improve long-term survival of reef fish by up to three times. Descending devices are weighted devices that help fish overcome buoyancy and injury by releasing them at depth. These devices come in a variety of forms including weighted inverted hooks, lip clamp devices, and weighted crates and boxes.