Is It Safe To Swim? The Truth About Boat Sewage and Water Pollution

Most boaters I’ve spoken with understand that boat sewage is bad. In fact, a lot of them choose never to discharge it overboard, even where it is legal. However, they still have questions and are surprised to learn some of the facts. So, let’s take a deeper dive into the issue.

Boat sewage generally falls into one of two categories: treated or untreated. Treated sewage passes through a Type I or Type II Marine Sanitation Devise, or MSD. Depending on the boat set up, the treated waste is then stored in a Type III MSD (holding tank) or discharged directly overboard. Untreated boat sewage may be stored in a Type III MSD or discharge directly overboard. Again this depends on the boat’s set up and operation of the Y-valve (we’ll get further into those topics in another blog).

Even when treated, boat sewage increases levels of nutrients in the water, since the treatment systems on boats are only designed to reduce bacteria and solids, not nutrients. Excess nutrients from sewage, like phosphorus and nitrogen, can contribute to harmful algae blooms (HABs), which block sunlight penetration and contribute to lower oxygen level in the water. Sunlight is needed by aquatic plants like seagrass, an important nursery for many recreationally and commercially important fish and shellfish, not to mention manatees. Additionally, when sewage breaks down, it uses up oxygen in the water. The amount of dissolved oxygen in the water required to decompose organic matter is measured in terms of “Biological Oxygen Demand” or “BOD”. Waters with high BODs and HABs make it difficult for fish and other aquatic life to survive. Check out the table below for a comparison of untreated boat sewage versus untreated municipal sewage. 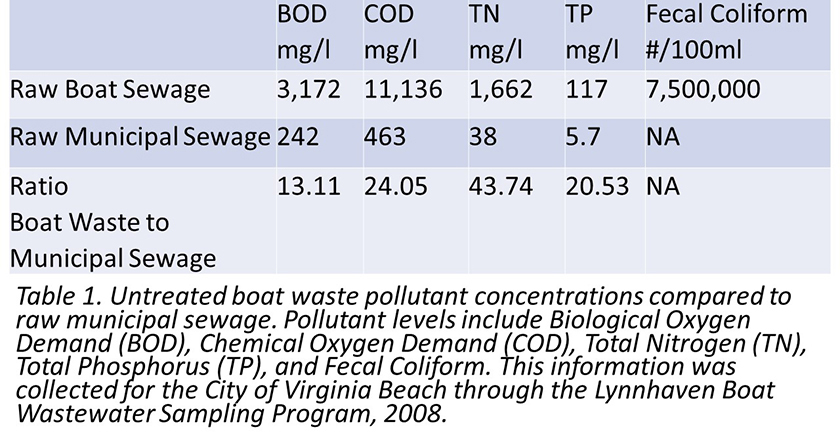 To see the full report, contact Vicki Gambale at v.gambale@ufl.edu.

Okay, so now we know how boat sewage may contribute to HAB’s. As if that’s not bad enough, there’s more. Raw or poorly treated sewage can spread diseases. Human waste contains bacteria, viruses, and potentially parasites. Contact with water contaminated by human waste can make you sick. And usually, it’s impossible to tell with the naked eye if the water you’re recreating in may be contaminated by sewage. Common symptoms include nausea, stomachache, vomiting, diarrhea, sore throat, earache, respiratory problems, skin infections and rashes. Serious waterborne diseases include hepatitis, typhoid, dysentery, and cholera. After enjoying a fun day on the water, the last thing you want is to get sick because of it.

Usually, it’s impossible to tell with the naked eye if the water you’re recreating in may be contaminated by sewage. 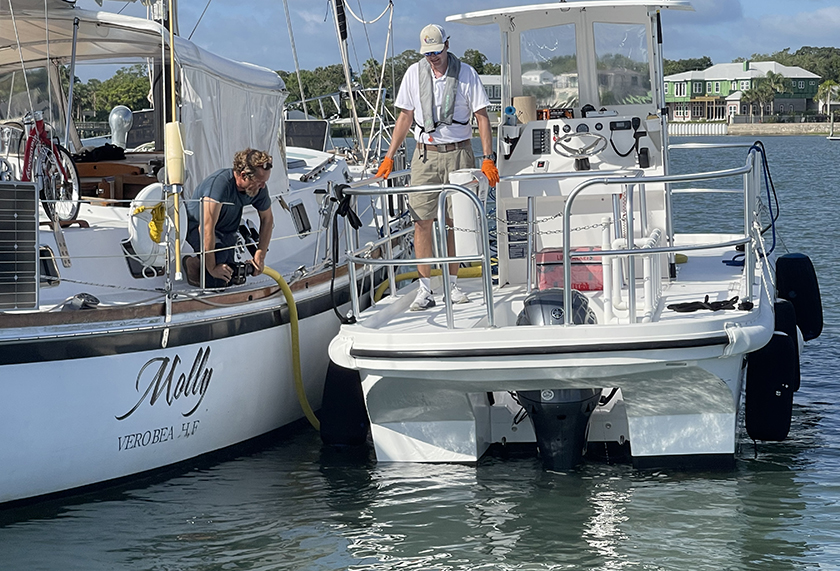 Finally, human waste discharged overboard can contaminate shellfish beds. Shellfish like clams, oysters, scallops, and mussels are filter feeders. They take in large volumes of water every day and eat the tiny food particles in the water, along with any bacteria and viruses that are present from sewage. Thankfully, shellfish beds are monitored closely to make sure they’re safe to eat, so people don’t get sick. However, sewage discharged overboard can cause the closure of shellfish beds which people rely on to make a living and feed their families.

Thank you for doing your part to keep our water clean. If you see an illegal discharge of oil, chemical, or sewage, report it to your local coast guard office, the national response center at 1-800-424-8802, Florida Fish and Wildlife Conservation Commission at 1-888-404-FWCC (3922), or your local law enforcement officer.